I decided that for this section of my blog I will start with Johnny Depp. He is one of my favorite actors in the world and as such, I thought he deserved to be the first. I will be choosing the movies randomly using an app called Daily Decision. The first movie that came out is Secret Window. 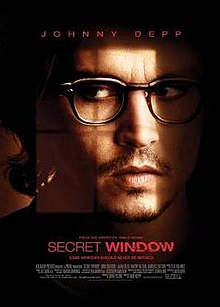 Screenplay and direction by- David Koepp

Based on – Secret Window, Secret Garden by Stephen King

Johnny Depp plays Mort Rainey, a well-known author who is getting divorced. In the need of some piece of mind, he secludes himself in a cabin in the woods in order to write. One day, he gets a visit from a strange man named John Shooter (John Turturro), who claims Mort has stolen one of his stories. Throughout most of the plot, we see Mort trying to deal with Shooter in different ways as he also deals with his soon-to-be ex-wife (Maria Bello), who pushes Mort to sign the divorce papers.

This plot seems innocent enough, but then as the plot moves forward the story becomes chilling, filled with twists and turns that are very hard to see coming.

Mort is a newly single man. He doesn’t shower much, he talks to himself or his dog, he lies around and sleeps a lot. Mort is the type of character that would seem typical if it wasn’t played by Johnny Depp. The close-ups to his face are made so that the viewer doesn’t miss a single twitch on his face, making Johnny Depp’s performance all the better. The secondary characters fall a little flat, but I think it’s done on purpose to keep the attention on Mort.

The pacing is deliberately slow in order to allow the viewer to immerse in Mort’s daily life and see how it slowly evolves due to having John Shooter in his life. Director David Koepp does an amazing job at portraying anxiety and distress throughout the movie. Even when nothing bad is happening, there is a feeling that something is wrong. The colors are dark and dull, the mood is tense and the tone is always edgy. This movie has a PG13 rating, which is unusual for a psychological thriller. What amazes me the most is how Koepp manages to reach the climax in a chilling tone without using gore whatsoever. Whereas some psychological thrillers rely on gore to produce anxiety, the tension created by this movie is purely psychological. The soundtrack fits the mood well and the moments of silence are also critical.

“You know, the only thing that matters, is the ending. It’s the most important part of the story, the ending. And this one, is very good. This one’s perfect.”

This movie is highly underrated and I don’t think it got the attention it deserved when it first came out. Koepp takes Stephen King’s short story and adapts it to become a full movie with a neverending tension and a complex plot. Johnny Depp is obviously the highlight of the movie, but everything else works as well. I wish there was more I could say without spoiling the ending, but it’s such a great ending I really don’t want to ruin it for you guys. I love this movie. I have seen it a million times, I watched it again to write this review, and I still find it entertaining.

Obviously, since it’s the first review, Secret Window is in first place for now.

Have you seen this movie? Would you like to? Let me know!